I got distracted again. It wasn't my fault, it was the sparrows. They had been traumatised by a new seed feeder we had bought for them. So much so that they were even avoiding their favourite hangout, the enormous honeysuckle in the corner of the garden, such was their fear of this strange new addition. Then yesterday they finally overcame their reservations and braved the new feeder. Feeling the need for photographic evidence, I lurked about in the kitchen for a while with my camera. Sadly they spotted me, retreated instantly to the honeysuckle and refused to come out until I finally gave up and returned to work.
Still, I did do a fair bit of editing. I also chose which stories I wanted for the QT Anthology, Book One, which will be available very shortly, free for Kindle. I also created the cover. So, I was able to strike another two items from the to-do list yesterday. I've now done all the short jobs on the list, so it will be a while before I can tick off any more.
This is the cover design for the first of the Anthologies: 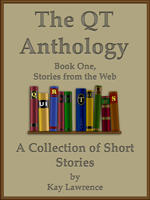