Latest Tales from the Café

I haven't had a great deal of time for my own writing this week as I've been devoting myself to preparations of the third volume from Café Three Zero.
'RANDOM: Tales from the Cafe, Volume Three' should be available on Saturday 23rd Feb 2013, but there a still some final adjustments to make before we can publish. 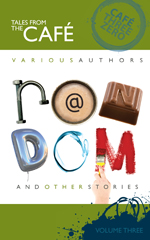 The idea behind this book was that we should each write a short prompt: a setting, a person, whatever came into our heads. These were then submitted to the group and reassigned randomly. It proved harder than it initially sounded, but it's produced some pretty diverse responses, including one from the winner of a competition run on the CTZ site.
I'll let you know as soon it's available, on both Kindle and Smashwords.
Posted by Quirky Tales at 09:45