He who fixes the computer has a smart new bike. This is exciting news, because he's been riding the same Raleigh for so many years now that we'd come to believe they were inseparable. The Raleigh had begun life in a very fetching British Racing Green, but over the years disintegrated into what can only be described as 'Soot'. Popular legend has it the sum of the parts is kept together by the accumulated grime but, as we've never dared clean it, it's impossible to confirm. His new bike is a very dashing bright blue. Naturally, photos had to be taken, so the computer fixer rode slowly past as I desperately tried to focus on him before he disappeared from view. It proved far harder than expected, and reminded me of a similar problem encountered on our holiday.
We had arrived in Bourg d'Oisans, a lovely little town surrounded by mountains and enormously popular with cyclists lured there by the Alp d'Huez, and were told the road would be closed the following day as the pre-Tour de France training race would be passing through. So the next morning, cameras at the ready, we lined up along the road.
We waited. All was quiet. Then came a couple of motorcycles. Then a couple more. Then some cars. Then more motorcycles. Then ... yes! Cyclists! I fumbled with my camera for a second. Looked up. They'd gone! Fortunately that was the break, the pelaton was to come. We waited. More motorcycles. More team cars. More motorcycles. Then there it was, the pelaton. Okay, this time! Blast! They've gone!
Photographing cyclists is clearly a skill I've yet to master, but here's one of the Sky team leading the pelaton. Sorry it's a bit blurry, but those guys really motor! 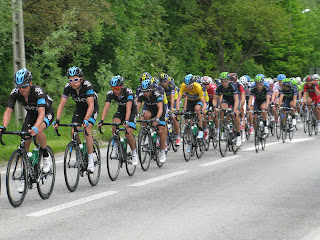